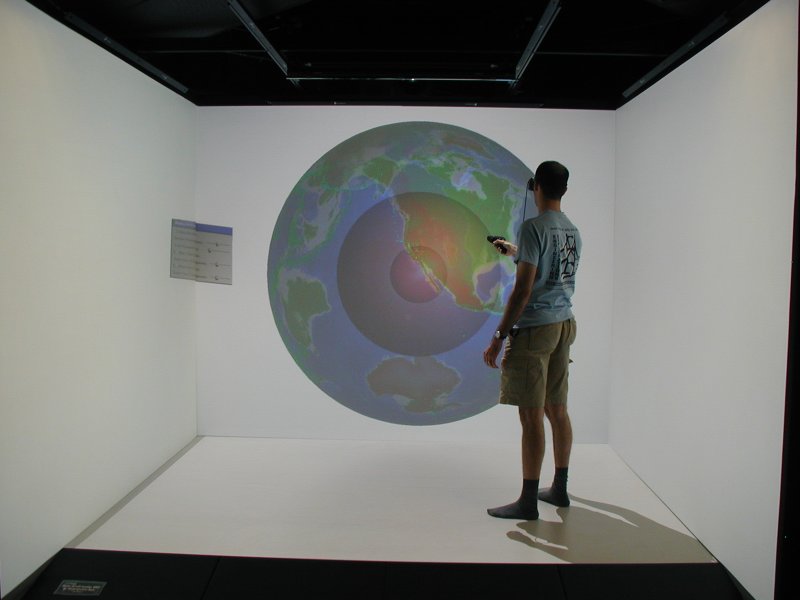 The KeckCAVES is a unique visualization collaboration that is developing software to interact with three-dimensional data in real-time – moving, rotating, coloring, and manipulating datasets with ease using a wide range of visualization and interaction hardware. Our software is built to run on anything from standard computers to fully-immersive virtual reality systems such as CAVEs or VR headsets. At the DataLab we continue to advance data visualization research and develop new tools to address new types of data and data science problems for an expanding group of users.

The KeckCAVES started as a collaboration between geologic and computer scientists focused on co-developing visualization techniques to improve scientific interpretations of complicated data and model results. It has expanded through the years and provides an environment for collaborative research, teaching, education, and mentoring in the use of interactive visualization methods for understanding data and computational models from any area of inquiry.

For more than a decade the core facility at the KeckCAVES has been the CAVE. This system consists of three walls and floor with stereoscopic displays providing full 3D images, head-tracking to render perfect stereo for the tracked viewer, and a set of tracked input devices for in-depth interaction with the visualizations. This platform was used to develop many pieces of research and educational software, which has been made compatible with linux/unix/OSX desktops, 3D TV-based “mini-CAVEs,” GeoWalls, and other systems.

Several of the software tools developed in the KeckCAVES have reached wider usage, such as the Augmented Reality (AR) Sandbox, 3DVisualizer, and Crusta.

The project seeks to raise public awareness, understanding, and stewardship of freshwater lake ecosystems and earth science processes using immersive 3D visualizations of lake and watershed processes. The final product is self-contained and ideal for use as a hands-on exhibit in science museums or for classroom use in Earth science education at all levels.

The code for the AR Sandbox has been made available to anyone under the free and open-source GNU General Public License, and detailed plans and installation instructions are provided so others can take advantage of this educational tool. The AR Sandbox forum is regularly active with conversations and questions about the project.

The AR Sandbox is the result of an NSF-funded project on informal science education for freshwater lake and watershed science developed by the UC Davis’ W.M. Keck Center for Active Visualization in the Earth Sciences (KeckCAVES), together with the UC Davis Tahoe Environmental Research Center, Lawrence Hall of Science, and ECHO Lake Aquarium and Science Center.

3DVisualizer uses carefully optimized algorithms and data structures to support the high frame rates required for immersion and the real-time feedback required for interactivity. As an application developed for VR from the ground up, 3DVisualizer realizes benefits that usually cannot be achieved by software initially developed for the desktop and later ported to VR. 3DVisualizer can also be used on desktop computers running the Linux operating system with a similar level of real-time interactivity, bridging the ‘‘software gap’’ between desktop and VR that has been an obstacle for the adoption of VR methods in the Geosciences.

While many of the capabilities of 3DVisualizer are already available in other software packages using desktop environments, several features distinguish 3DVisualizer:

LiDAR (Light Detection and Ranging) uses a laser and sensor to measure the distance and color of surfaces the laser is reflected off of. This generates a sparse representation of any surfaces the LiDAR scanner is run across, generating clouds of points in space. These points typically need significant post-processing to convert clouds of single points into recognizable 3D geometry. LiDAR Viewer directly displays LiDAR point clouds as navigable and interactable 3D environments in VR. LiDAR Viewer can also analyze data; for example, an interactive selection tool can be used to mark subsets of the LiDAR points defining a single feature, and algorithms can then derive equations defining the shape of such features.

LiDAR Viewer uses special data structures to interactively visualize and analyze LiDAR data sets of almost unlimited size, with the current in-house record at 11.3 billion data points. We implemented a brush-based selection tool that allows a user to select points by touching them with a "brush" connected to a VR input device or mouse and keyboard. The software currently supports the categorization of point clouds into line, plane, sphere, or cylinder shapes. It also contains a simple color mapping algorithm that visualizes each point's distance from a reference plane for creating quick visual elevation maps. More recently, we added point-based illumination, which allows points to be illuminated as if there were full 3D shapes. This utility can handle multiple light sources in real-time with little impact on performance.

Crusta is an interactive viewer and mapping tool for local, regional, or global high-resolution topography data, typically combined with aerial or satellite imagery. Unlike most other GIS software, Crusta uses a virtual globe to support mapping directly on the 3D surface, without the need for map projections. Crusta uses a multi-resolution representation that supports interactive work on globe-sized data sets with resolutions reaching a meter or smaller.

Crusta was developed by a computer science graduate student working closely with students in geology who deﬁned the needs, tested the code, and suggested additional features. Crusta allows for the representation of high-resolution surface data, visualization of these data on a real-time virtual globe, and efﬁcient exploration and annotation using real-time interactive software tools.

Crusta has been prominently used during UC Davis's scientific response to the 2010 Haiti earthquake, and in evaluation of potential landing sites for NASA's Curiosity Mars rover mission.

To support collaborative scientific exploration for teams of scientists using VR headsets that occlude their vision and prevent real person-to-person interaction, KeckCAVES has been developing a collaboration framework that can put multiple users—each using or wearing their own set of VR equipment—into the same virtual space where they can work on 3D scientific data together. The same framework also supports remote collaboration, which can bring together scientists from multiple locations into a "holographic" meeting. Scientists can work “cross-platform” between CAVEs, VR headsets, or other VR platforms.

This framework has already been used for tele-medicine applications connecting multiple physicians or a physician and their patient, and for a virtual theater performance where multiple actors in different locations acted with each other.

DataLab’s own Dr. Oliver Kreylos showcased his work on the European Geosciences Union Blog this week, discussing an array of his work and the value of immersive visualization technology. Read his post here to learn more about his research. FacebookTweetLinkedIn
FacebookTweetLinkedIn