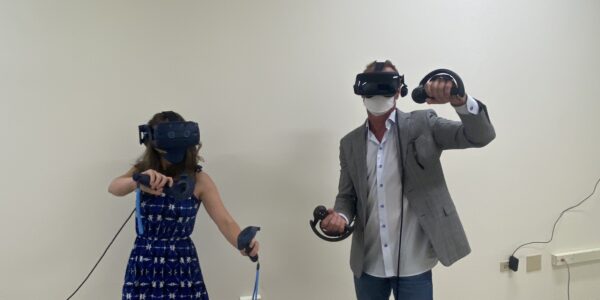 The facility’s VR hardware, including gaming headsets, combined with the immersive visualization software allow researchers to literally step into their data to explore, analyze and directly manipulate it. Using this technology researchers can navigate through 3D data, spin and walk around it, and interactively query it to subset and take measurements. And, they can do this collaboratively in real time with both local and remote research teams. You can see an example to the right as Dr. Dawn Sumner, Department of Earth and Planetary Sciences, showcases the instrumentation of NASA’s Curiosity Mars rover using a hybrid VR environment consisting of a commodity VR headset (HTC Vive) and a large projection screen.

DataLab’s new facility offers compatibility with other VR modalities, such as large-screen projections, to create hybrid virtual workspaces. These co-located and distributed multi-user virtual workspaces allow distributed teams to immerse themselves in their data together in real time, enhancing collaboration and generation of novel insights. This new VR space is intended for use by DataLab-affiliated researchers, and connects to other visualization facilities across UC Davis including W.M. Keck Center for Active Visualization in the Earth Sciences (KeckCAVES) and ModLab. It also connects to VR systems owned by collaborating researchers locally and abroad, and engages with the growing international community of scientists leveraging immersive visualization technologies for teaching and research.

This effort is led by Dr. Oliver Kreylos, who joined the DataLab team in 2021 as our new Immersive Visualization Specialist, and is an exciting new extension of his work as the former chief technologist at the KeckCAVES, which was housed in the UC Davis Department of Earth and Planetary Sciences and is currently inactive. Construction of the new immersive visualization facility within the DataLab space in Shields Library began over the summer 2021 and is expected to be completed by early 2022. Planned and ongoing software development efforts at DataLab also include visualization applications for additional types of data such as non-spatial, high-dimensional, or network data.