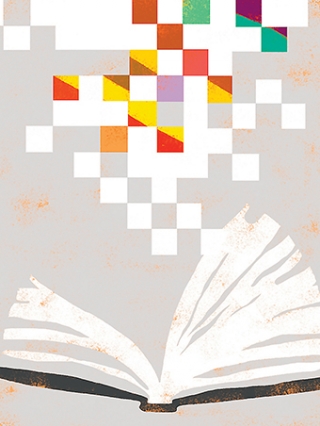 Gwenda Kaczor for The Chronicle

There are digital humanities. Digital technology is remaking humanistic study. How could it not? The digitization of the humanities isn’t the sort of structural process that could be reversed or abandoned. Consider the retrospective absurdity of “The Print-Humanities Bust,” a hypothetical essay published, let’s say, in 1517, soon after print technology reached Europe. “What exactly has the codex accomplished?” an ancient Timothy Brennan, used to reading scrolls, might have asked.

Brennan comes close to acknowledging the non-existence of his target when he remarks on “a basic confusion of terms: the digital in the humanities is not the digital humanities.” Brennan considers “the digital humanities” to be “a program and, ultimately, an epistemology.” This is news to me, an English professor who does not know how to code but who uses digital technologies in teaching and who contributed to an interdisciplinary digital research project in graduate school.

Digital technology doesn’t transform knowledge in one single way, programmatically, any more than print technology did. Introduced, in England, by William Caxton in the late 1470s, print technology brought ideas to new readerships, but it also helped center literary culture around a small group of well-connected men at the English royal court: Wyatt, Surrey, Spenser, Sidney, Raleigh, Bacon, Marlowe, Shakespeare, etc. Digital media can be put in the service of boring, wrong, or politically odious scholarship and teaching — just like print media.

Digital technology can aid humanists in answering questions they are already invested in answering. In my classroom, for example, annotation of medieval English poetry on Genius.com develops skills of close reading. Sarah Bond describes how digital-mapping projects are deepening our understanding of racism and segregation. Digital humanities are continuous with print humanities.

The problem with the formulation “the digital humanities” is that it equates a new institutional investment with a new form of knowledge. Institutional investments and forms of knowledge are related, but you can have one without the other, as any independent scholar or any director of a Center for Some New Combination of Disciplines will tell you.

What digital-humanities skeptics really object to is that colleges and universities are co-opting digitized research and teaching for ostensibly nefarious purposes. Brennan worries that what “the digital humanities” do is “create a framework for lucrative tech deals in classrooms with the promise of the vast automation of teaching.” Laying that criticism at the feet of researchers who use digital techniques within their disciplines isn’t just unfair, it’s a category mistake. The problem with lucrative tech deals is the lucre, not the tech.

The problem with the formulation ‘the digital humanities’ is that it equates a new institutional investment with a new form of knowledge.

The case against the current institutionalization of digital humanities is a case worth making. In a much-discussed essay, Daniel Allington, Sarah Brouillette, and David Golumbia indict digital scholarship for facilitating “the corporatist restructuring of the humanities.” The authors characterize “the digital humanities” less as an intellectual failure than as an objectionable form of academic politics, a suspect “social movement.” Still, they can’t resist asserting a contrast between “the digital humanities” and “the humanities … in their traditional form … relying on painstaking individual scholarship and producing forms of knowledge with less immediate economic application.”

It’s important to remember that the humanities “in their traditional form” also had noxious institutional politics. In the 19th and early 20th centuries, the humanities “in their traditional form” practiced largely by middle-class and wealthy white men, provided the intellectual rationale for colonization, slavery, and genocide. The “privileging of technical expertise above other forms of knowledge” (Allington, Brouillette, and Golumbia) is not new; it characterized the human science of philology as recently as the first half of the past century. Criticism of “the digital humanities” on political grounds has to work hard not to nostalgically rewrite disciplinary history.

The real animus behind attacks on “the digital humanities” comes from anxiety about something else: the much-hyped crisis of the humanities. Allington, Brouillette, and Golumbia are clear about this, lamenting that “the 21st-century university has restructured itself on the model of the corporate world.” They’re right. The 19th- and early 20th-century arrangement of institutional energies in the humanities now appears obsolete in the face of corporatization, adjunctification, and deanification. When university administrators and other promoters hail digital scholarship as the savior of the humanities, humanists, understandably, balk. “The digital humanities” can feel less like a new field and more like an existential threat.

Still, it would be a mistake to interpret this institutional problem as an epistemological one. The history of academic disciplines shows that knowledge and institutions stand in an incommensurate, even if symbiotic, relation. Knowing the world differently does not, in itself, change the world. Angela Davis published Are Prisons Obsolete? in 2003, yet prisons persist. At the other extreme, one can produce knowledge worth knowing even in deplorable institutional circumstances. In my own field, medieval studies, some important 20th-century scholarship was composed by English and German scholars sympathetic to — sometimes even collaborating with — the Third Reich.

In between, knowledge and institutions might roughly conform: a book in the shape prophesied by a research-grant proposal, for instance, or an interpretive move specific to a department at Berkeley. But no critique of the institution of the research grant would in itself vitiate the grant-shaped book. How could it? And yet this is the type of task that some critics of “the digital humanities” have set for themselves.

In this way, hit pieces on “the digital humanities” betray a deeper tension in the profession. Often committed to left politics and conversant in poststructuralist theories of social power, faculty members and graduate students find themselves employed by megacorporations. Will the megacorporation support the kind of intellectual work that seems most valuable for imagining and realizing a better world? Or will the megacorporation make that work very difficult? Those are genuine institutional questions, and they can only have institutional answers.

The catalog of the things “the digital humanities” is allegedly ruining turns out to be a catalog of the things humanists value about humanistic inquiry in general: qualitative interpretation; reading texts closely and slowly; rereading; thinking against prevailing norms; “critique” and particularly “scholarly endeavor that is overtly critical of existing social relations” (Allington, Brouillette, and Golumbia). Brennan is right that these are the humanities’ “reason to exist.” He is wrong to suppose that digitization could cleave humanistic study from them. Print technology didn’t kill these things, and neither will digital technology.

Eric Weiskott is an assistant professor of English at Boston College.

Source: There Is No Such Thing as ‘the Digital Humanities’ – The Chronicle of Higher Education