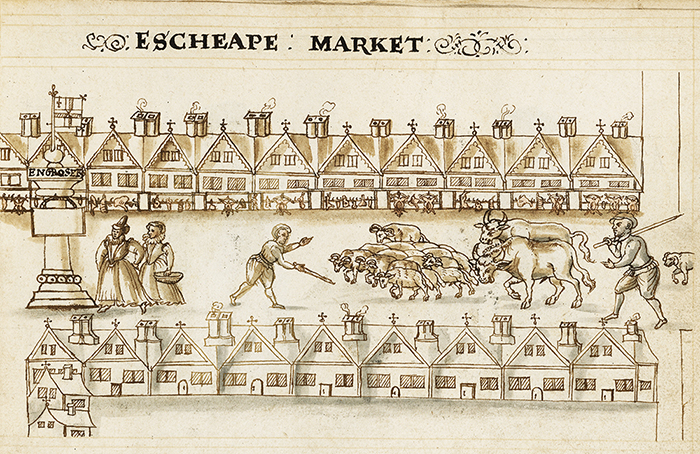 LAWRENCE — Jonathan Lamb could not have written his new book, “Shakespeare in the Marketplace of Words” (Cambridge University Press), in a pre-digital age.

“I wouldn’t have been able to write this book 30 years ago,” he said recently, “because 30 years ago there wasn’t a 2 billion-word corpus that I could search for reflexive pronouns or conjunctions or whatever. The digital revolution has made available a new kind of perspective.”

Lamb’s book sets out not to diminish Shakespeare’s monumental genius, but, rather, to show how his works were perhaps less original than they might seem today and how they were influenced by the linguistic fads and trends of his day – “the marketplace of words” around him.

“We tend to think of Shakespeare and the market in terms of the literary market or the book trade, and we should; that’s an important thing to consider,” Lamb said. “But I am interested in the way Shakespeare as a writer took from what he read and encountered and used it to assemble his plays or poems and make them available.”

Lamb, an Assistant Professor of English, cites as an example the scene in “Richard II” in which the king gives up his crown.

“In most of the play,” Lamb said, “King Richard doesn’t use reflexive pronouns like ‘myself.’ He does a few times, but they are sort of plural; like he will refer in kingly language to ‘ourself.’ But all of a sudden, in the scene where he is giving up the crown, he uses the word ‘myself’ rapid-fire — seven times in a matter of 70-something lines. He says, ‘Now mark me, how I will undo myself.’

“What I have done is use digital archives to recover the discourse on which Shakespeare was drawing for those words. One of the big trends in Shakespeare’s lifetime was a return to stoic philosophy. You had a lot of writers and thinkers in Europe and England taking Christian theology and combining it with classical stoicism. Today we call it neo-stoicism. What I found is that — and here’s where the verbal marketplace comes in — texts that are part of that neo-stoic trend also use a proportionally significant number of reflexive pronouns. So you have a bump in the late 16th and early 17th century verbal marketplace. It’s rich with ‘myself ‘and ‘himself’ and ‘herself.’ Reflexivity has a particularly high value.

“It’s like a linguistic fad,” Lamb said. “You have people use reflexive language as a code for a particular way of thinking about the self. My main argument is that when Shakespeare uses that word in “Richard II,” he is appropriating the currency of the stoic self to create a rich dramatic moment. The king is giving up his crown and becoming disempowered. What, again, is stoicism? It’s the philosophy of the disempowered. So it makes perfect sense that Richard would start to use ‘myself.’ People who use ‘myself’ are not in any kind of authoritative position.”

“The pronouns we use matter. They speak to the kind of rhetorical and even political situation in which we find ourselves.”

Similarly, Lamb cited a line from Shakespeare’s romantic poem “Sonnet 116” – “let me not to the marriage of true minds admit impediments” – which he said draws upon the language of the marriage ceremony in the Church of England’s Book of Common Prayer “when the priest asks, ‘Can anyone offer impediments to this union?’”

In this way, Lamb said, Shakespeare “is using the language that’s familiar to people about marriage and then applying it to the creation of a sonnet.”

“To create ‘Midsummer Night’s Dream,’ Shakespeare used something like eight different books to figure out the plots and pull together the characters,” Lamb said. “So it wasn’t like he read a single book and just adapted it. He assembled parts from various traditions. That’s why I say he assembled it like a Lego.

“And then all of a sudden you have an artifact that was just a bunch of pieces before, and now it’s an interactive assembly. And each one speaks back to the various things that were used to create it.

“One thing I have learned students love to talk about is Shakespeare’s ‘authoritative genius.’ And he was, but not in the sense that we mean: His plays didn’t just spring from his brain. They came from the world around him. That’s why the notion of interactive assembly makes so much sense to me, because the creation of something new is the result of a making process.”

The University of Kansas is a major comprehensive research and teaching university. The university’s mission
is to lift students and society by educating leaders, building healthy communities and making discoveries
that change the world. The KU News Service is the central public relations office for the Lawrence campus.