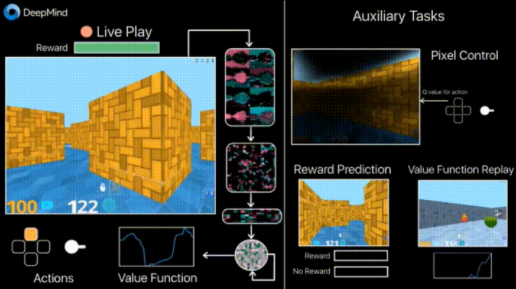 Google DeepMind, a subsidiary of Alphabet thatâ€™s focused on making fundamental progress toward general artificial intelligence, is releasing a new 3-D virtual world today, making it available for other researchers to experiment with and modify however they wish.

The new platform, called DeepMind Lab, resembles a blockish 3-D first-person shooter computer game. Inside the world, an AI agent takes the form of a floating orb that can perceive its surroundings, move around, and perform simple actions. Agents can be trained to perform various tasks through a form of machine learning that involves receiving positive rewards. Simple example tasks that will come bundled with the platform include navigating a maze, collecting fruit, and traversing narrow passages without falling off.

â€œWeâ€™re trying to develop these artificial intelligence agents that can learn to perform well on a wide range of tasks from looking at the environment and from observing what happens,â€ says Shane Legg, chief scientist and cofounder of DeepMind.

The company has used versions of the environment, known previously as Labyrinth, internally for some time (see “How Google Plans to Solve Artificial Intelligence“). It previouslyÂ made some its first big headlines by creating AI agents capable of learning, through trial and error, how to play many Atari video games (see â€œGoogleâ€™s AI Masters Space Invadersâ€).

An open and customizable 3-D world provides more complex and visually rich challenges for agents, but also means a much wider range of potential tasks. DeepMind Lab could lead to AI algorithms capable of transferring their learning from one task to the next.

Having AI agents work inside a 3-D environment could also have benefits for developing algorithms to control systems that work in the real world such as industrial robots, Legg says.

Whatâ€™s more, the idea of creating agents that learn about a simulated world from basic principles taps into key ideas about how humans learn, something Legg explored in his academic career. â€œJust like you or I would learn about the world as a child, itâ€™s a very fundamental approach to this learning and generality problem,â€ Legg says of DeepMind Lab.

Zoubin Gahrahmani, a professor at the University of Cambridge in the U.K., says DeepMind Lab and other platforms for reinforcement learning make progress more transparent by letting researchers test out each otherâ€™s ideas.

However, Gahrahmani also notes that existing approaches to reinforcement do not always measure up to human abilities so well. For instance, it usually takes a human far less playing time to master a particular video game or board game. â€œReinforcement learning approaches are very data inefficient,â€ he says. â€œHow do we get systems to learn at a pace thatâ€™s comparable to humans?â€