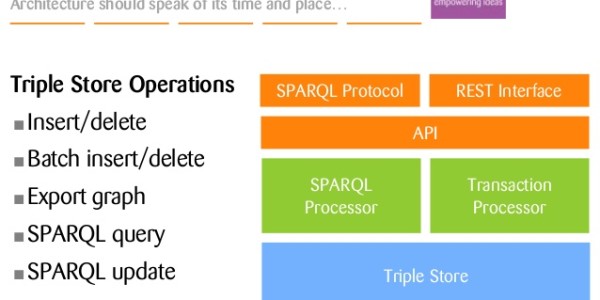 A key feature of many triplestores is the ability to do inference. It is important to note that aÂ DBMS typically offers theÂ capacity to deal with concurrency, security,Â logging, recovery, and updates, in addition to loading and storing data. Not all Triplestores offer all these capabilities (yet).

Native triplestores are those that are implemented from scratch and exploit the RDF data model to efficiently store and access the RDF data. These include: 4Store, AllegroGraph, BigData, Jena TDB, Sesame, Stardog, OWLIM and uRiKa.

RDBMS-backed triplestores are built by adding an RDF specific layer to an existing RDBMS. These include:Â Jena SDB, IBM DB2 and Virtuoso.

NoSQL Triplestores are recently being investigated as possible storage managers for RDF. For example,Â CumulusRDF is built on top of Cassandra. The folks at Seevl have implemented a triplestore on top of Redis.

Several benchmark studies have been done in order to evaluate the performance of Triplestores. Popular benchmarks are Lehigh University Benchmark (LUBM), Â Berlin SPARQL Benchmark (BSBM),Â SP2BenchÂ and recently the DBpedia Benchmark. The 2007 best paper at VLDB compares RDBMS-backed triplestores. Whatâ€™s the best triplestore? Check the results of each of the benchmarks. There is no one right answer.

Recently, the Linked Data Benchmark Council (LDBC) has been formed to create to establish industry cooperation between Triplestore vendors (just imagine the TPC of Triplestores).

A key feature of triplestores is the ability toÂ do inferencing for queries. For example, consider the following OWL ontology:

Which states that a Full Professor and an Assistant Professor are both Professors. We also have another ontology that has the class Teacher which is equivalent to Professor. Now consider the following data:

Which states that Bob is a Full Professor, Alice is an Assistant Professor and Mary is a Teacher. Given the following SPARQL query:

If inferencing is not enabled, the answer to the query is empty because the data does not assert that anybody is a professor. However, it is possible to infer that ex1:Bob, ex1:Alice and ex2:Mary are all professors because we know thatÂ Full Professors and Assistant Professors are both Professors and Teachers are also Professors.

Another common predicate that is widely used for inferencing is owl:sameAs. Consider the following data:

Given the following SPARQL query:

Without inferencing, the answer to the query would be empty because there is no triple that has as subject ex1:Bob and predicate foaf:phone. However, if inferencing is enabled, we can infer that Bob has the phone â€œ555-1234â€ because ex1:Bob is the same as ex2:Smith and ex2:Smith has a phone of â€œ555-1234â€.

SPARQL 1.1 introduces Entailment Regimes, which allows a user to specify the type of inference (entailment) that is needed.

Triplestores are made to be queried by a standardized query language: SPARQL. SPARQL is based onÂ graph pattern matching. Even though NoSQL Graph Databases donâ€™t have aÂ standardizedÂ query language, theses databases can perform not only graph pattern matching queries but are highly performant at reachability and navigationalÂ queries (find the shortest path between two nodes, or how are these two nodes connected). Actually,Â SPARQL 1.1 introduces Property Paths that allow users to specifyÂ theseÂ Â types of reachability and navigational queries in Triplestores. However, becauseÂ existing SPARQL query engines rely on data structures tailored toÂ efficiently perform pattern matching tasks, an efficientÂ implementation of these graph-based tasks may require furtherÂ extensions to existing Triplestores.

This is obviously not an extensive list of Triplestores and I know I may have missed many (apologies). The Wikipedia page on Triplestores offers a much larger list. Please feel free to add them in the comments. Additionally, please share in the comments if you know what Triplestore is backing up large public SPARQL endpoints. For example, Stardog is powering the recently launched BestBuy SPARQL endpoint; Virtuoso powers the DBpedia SPARQL endpoint as well as the Linked Open Data Cloud Cache and several datasets in the LOD cloud; BBC uses OWLIM; and UKâ€™s data.gov.uk is powered by Jena TBD.Â

Juan Sequeda is a Ph.D student at the University of Texas at Austin and a NSF Graduate Research Fellow. His research is in the intersection of Semantic Web and Relational Databases. He co-created the Consuming Linked Data Workshop series and regularly gives talks at academic and industry semantic web conferences. Juan is an Invited Expert on the W3C RDB2RDF Working Group and an editor of the â€œDirect Mapping of Relational Data to RDFâ€ specification. Juan is also the founder of a new startup, Capsenta, which is a spin-off from his research.